In 2006, international landscape architecture consultancy Grant Associates was appointed to masterplan the first, and largest, of the three gardens at Singapore’s Gardens by the Bay. A fusion of nature and technology, the garden is now home to two giant conservatories, spectacular horticultural gardens and, of course, the iconic Supertree Grove. We caught up with Founding Director Andrew Grant at the firm’s Bath office to find out more about these extraordinary structures. 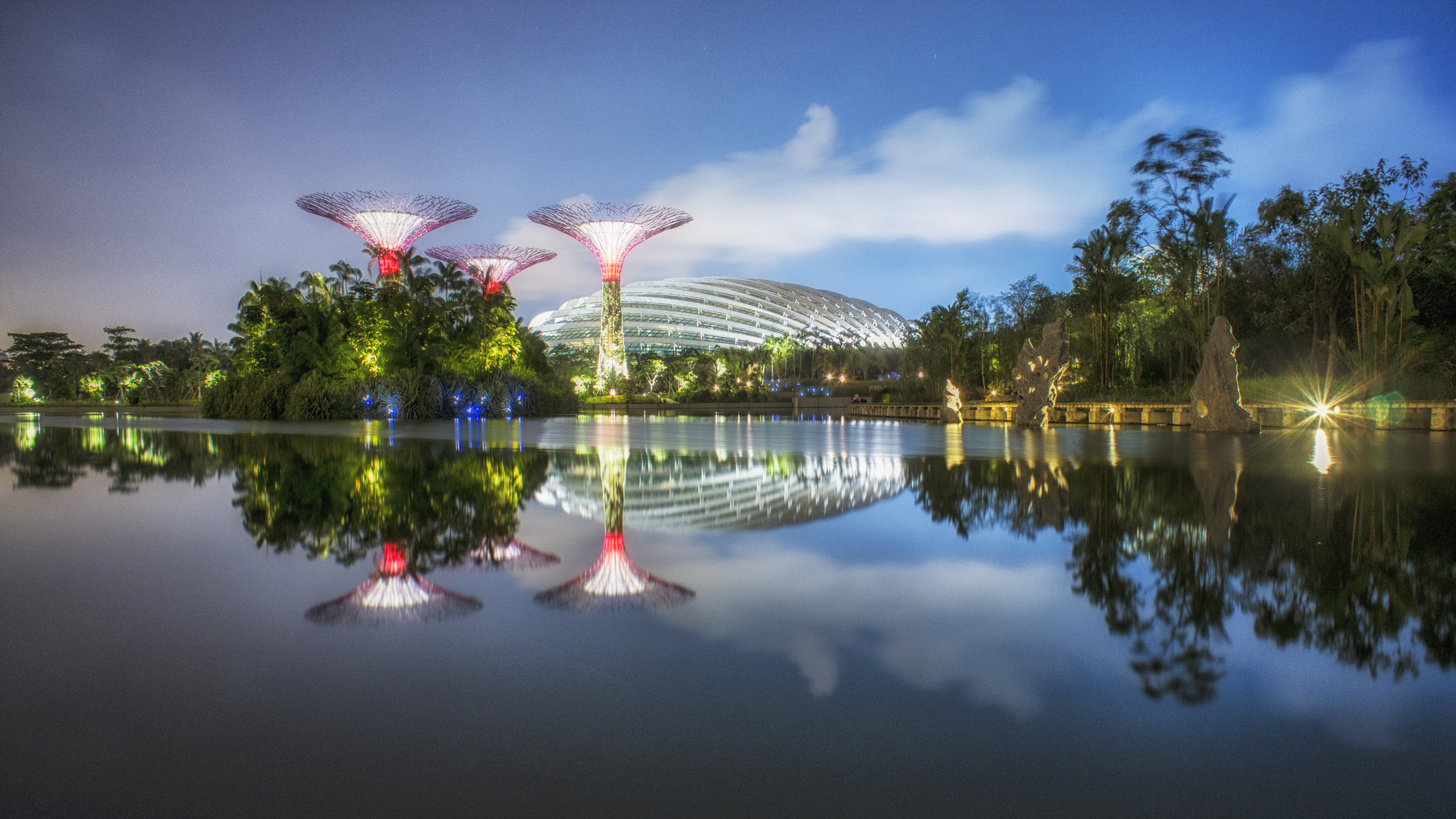 ECT: The Supertrees have become a signature of the Singapore skyline, but what actually they are?

AG: The Supertrees are essentially giant landscape structures in a giant garden. We wanted them to be a fusion of nature, culture and technology on a heroic scale to echo the vision for Singapore as a City in a Garden. There are 18 of them in total, ranging from 25m to 50m high, and each has its own personality derived from the planting, environmental function and how they are lit at night. On the one hand, the Supertrees evoke the identity of giant, colourful trees covered in epiphytic plants [i.e. plants that grow on the surface of other plants and derive their moisture and nutrients from the air, rain, water], and on another they are technological entities, some of which generate solar power and some of which act as exhaust stacks for the conservatories. They also provide shade, biodiversity habitat and support for the ariel walkway - the views from that are amazing. 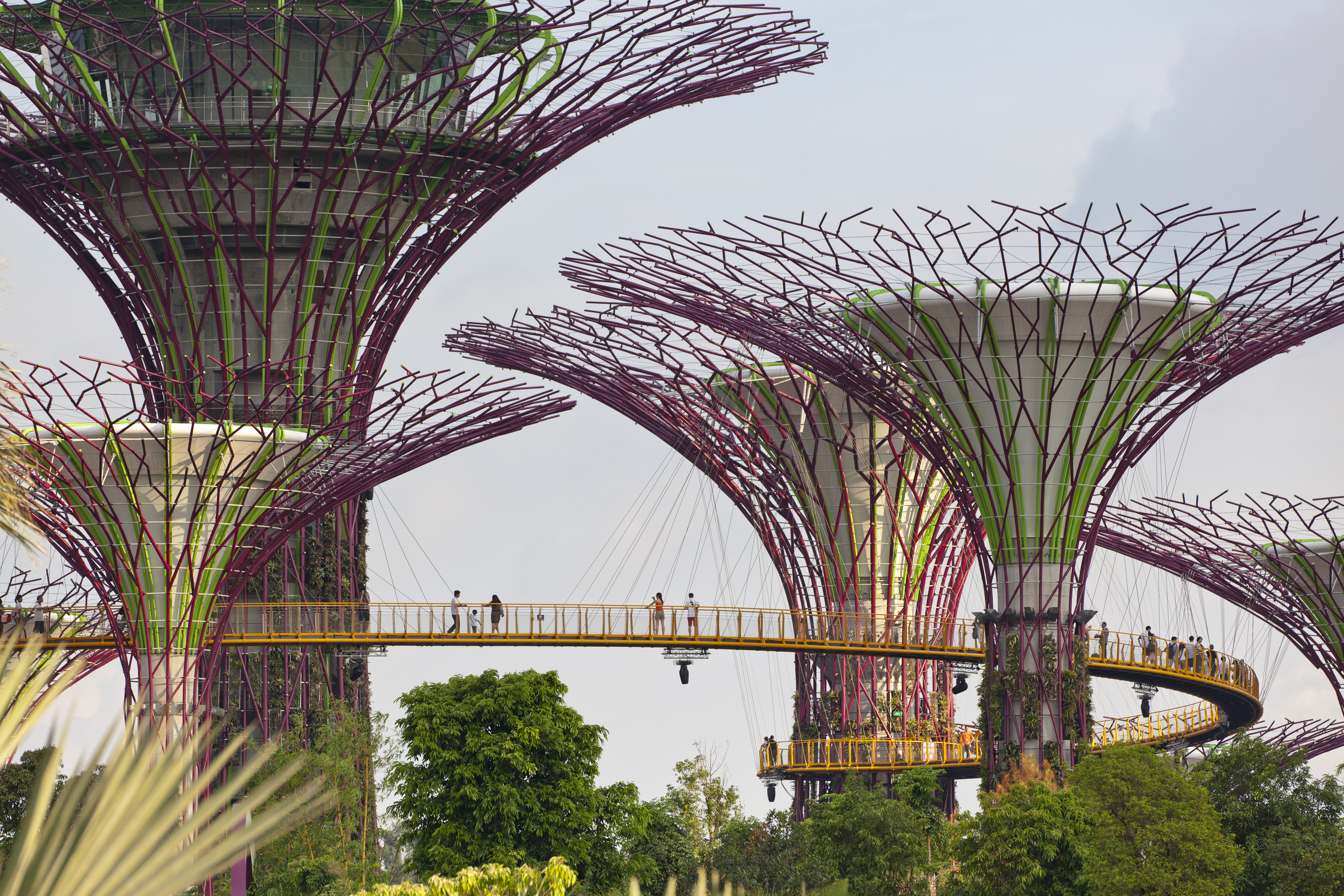 ECT: Grant Associates led the project, but creating these trees was a collaborative effort. Who else was involved?

AG: A key relationship was with the structural engineers Atelier One. Grant Associates defined the intended scale, character and detail of the trees, but the engineers were instrumental in finding the most effective, lightweight and innovative solution to creating the form. This was further enhanced by the environmental engineers, Atelier Ten, who integrated the environmental systems (solar panels etc) into the structure, and by Wilkinson Eyre Architects, who designed the inhabited structures such as the bar and restaurant on top of the largest tree.  Other important designers who contributed to the overall effect included the lighting designers, LPA, the horticultural team from Gardens by the Bay and the various contractors who worked together to actually build these extraordinary structures.

ECT: What was the most challenging aspect of the project and how did you overcome it?

AG: We faced challenges at each stage of the Supertree story. At the competition stage, there was some resistance within Singapore to the idea of 50m high, steel trees.  Then at the design stage, we tested many, many options for how to create the structural form, often using very advanced computer modelling, including the structural modelling specialist Chris Williams at the University of Bath. Gaining building permission required a review of local building codes - was this a landscape or was it a building – and, once we had permission, it proved tricky to find contractors in Singapore and Malaysia who could deliver the steel structures and erect them on site. Getting hold of enough epiphytes (including Orchids, Tillandsia’s and Bromeliads) to cover the trunks was quite a task too!

ECT: The relationship between people and nature is at the heart of  Grant Associate's thinking - how is this mission manifested in the Supertrees?

AG: I feel strongly that we need a variety of nature-based experienced in cities. At one level, it’s important to have a general backdrop of green space and a variety of habitats to engage with in a typical day. However, it is also important to be wowed and surprised by a natural experience. Waterfalls do this, as do fantastic panoramic views and night time forests.

ECT: And so do the Supertrees?

AG: Yes, the Supertrees play the role of being a super scale marker for nature in the city. Not only are they populated with many species of plants, insects and birds, they're also  a natural draw for people, especially at night. Their forms and structure echo the forms of trees in contrast to the rectilinear, glassy forms of the nearby city centre. 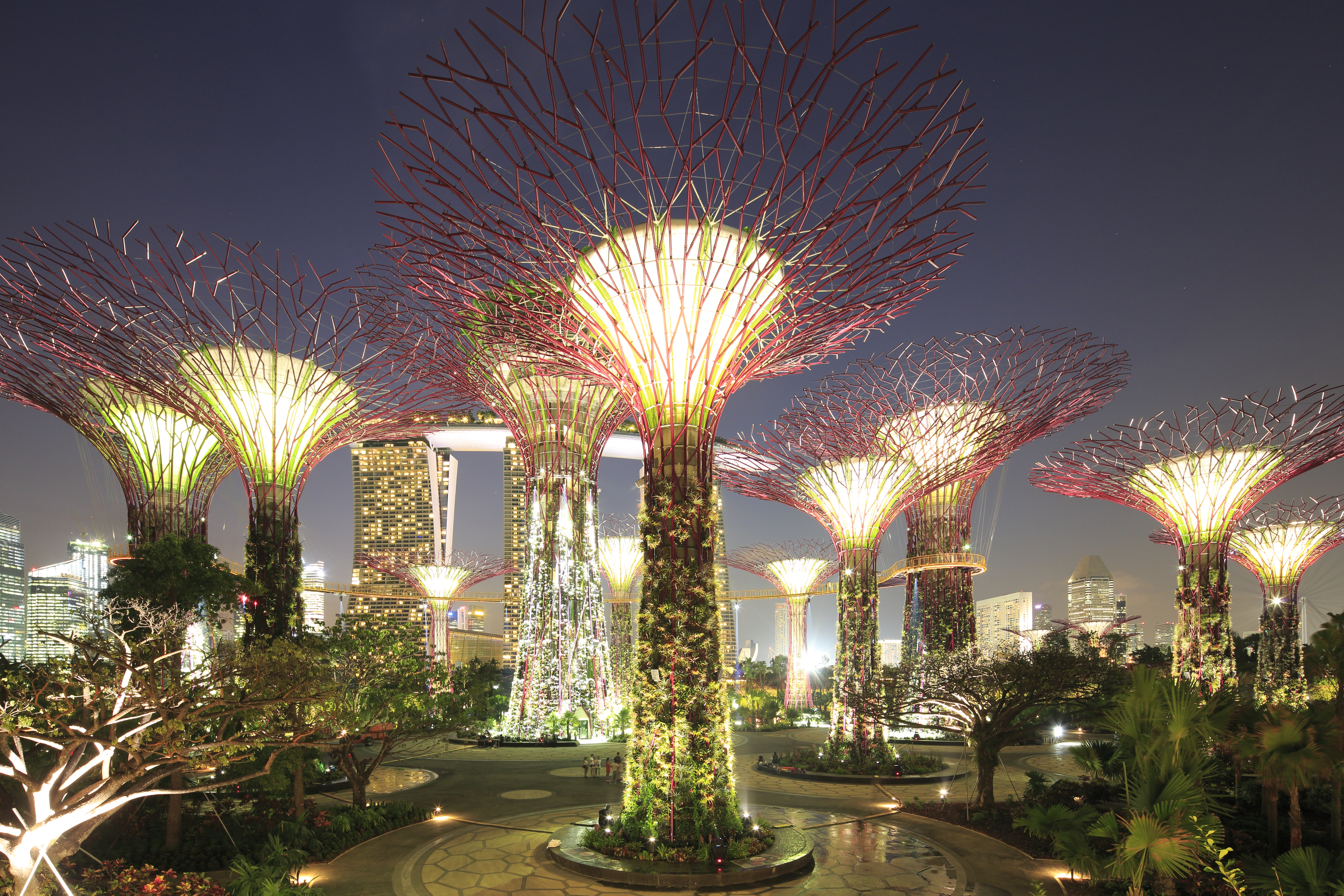 ECT: Should we being doing something similar in this country?

AG: We definitely need to upscale our approach to nature in the city in the UK. This is starting to happen, but we need interventions that offer this hierarchy of experience from gentle neighbourhood greenspace through to city and town scale landscapes that redefine the identity of that place.

Why not see the Supertrees for yourself at the Singapore Garden Festival. We have three tours available in 2020 - find out more here